Please feel to play along and tinker with the code.

To start with let's define an interface/abstraction for something we want to test against, the most basic key/value store:

Now let's write some normal property tests to test it:

So far so good. But do we think we have tested all the cases? Think about that for a second and let's see what happens...

We're looking at an interface with just two functions, but there are infinite ways in which we can interact with them. How well do are tests scale when we add one more function (ie delete)? Or ten?

What we really want to do is let our property testing library generate the interactions themselves!

At a conceptual level the idea with state-based testing is to "model" the real world with something pure (ie in memory). We then execute real commands against our system/api, and compare the result with what our model expects. 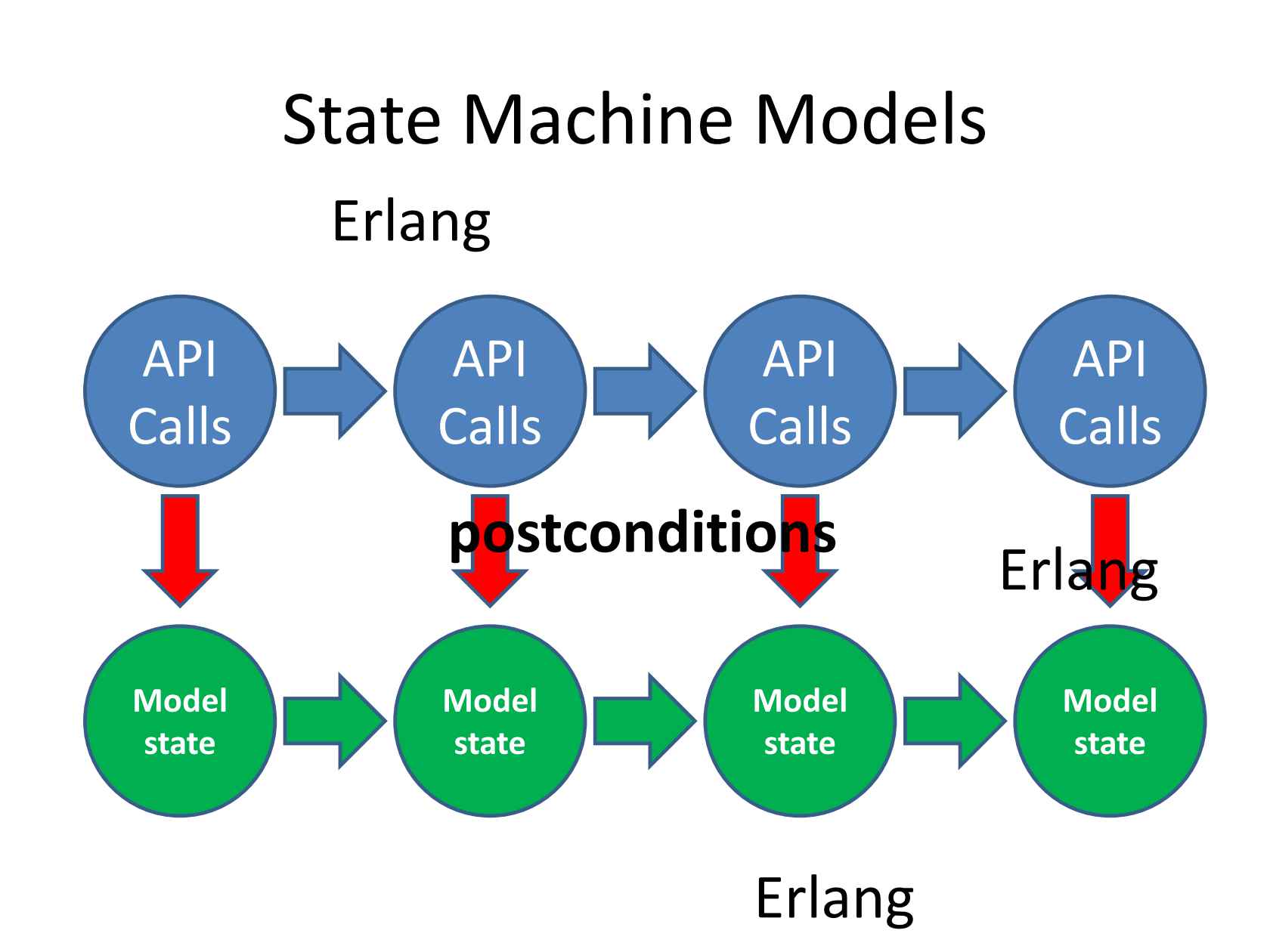 At the technical level the current approach to writing a state-based test is to implement a series of very specific functions for each operation or "command" you want to test.

Firstly let's create our pure domain model for testing. In this case it's trivial to think of a key-value store as an immutable Map.

For each command you quite often end up just reifying the function arguments in to a data type:

For each command you need to implement the Command interface. This can look quite daunting so let's step through it:

Firstly, we need to be able to generate random inputs to our command.

The key thing to note is that we take in the current state, which we might want to use to generate some values. There might be cases where no valid input can be generated. For example you need to call put before you can call get. One simple way to generate our operations would be something like:

But how often do we generate the same keys in either case? Shouldn't we try to generate similar keys sometimes?

That's definitely a little more involved, but you can see we're getting a good spread of put/get values with known/duplicate and unknown keys. That should cover everything, which is a critical component of good property testing in general.

This is the easy bit, just call our operation. Note the lack of our model/state, you can also interact with the "real world".

This is where we need to "model" what we expect that operation to do in our pure state.

This is the "post condition". What did we expect to happen in the real world vs our model?

Just as a side note, the s0 means the state before update is run, and s1 is the current state. It's always possible, and fairly common, to just use s1 and the input value.

The common question here is "won't we just end up with two implementations"? Yes and no. Obviously this is a trivial example. The model is so simple that we can actually have a 100% full re-implementation. This won't always be the case, we may only want to guarantee some invariants are true, but not the exact behaviour. Also remember that we haven't actually looked at the implementation of KV yet. It might be storing keys on files, or across the network with multiple copies. If there are any bugs in any of that code it's quite likely we will find it at some point.

So the final piece is to hook up all our commands to form a property. It would look something like this:

This can be added to Hedgehog like any other property:

Some errors that a naive file implementation found:

The first set of line(s) are the series of commands that have been run in order (ignore Var for now). Everything after that is our Result log.

So I'm generating invalid keys. So there is some restrictions on what our keys can be. Interesting. For now update the generator to something much more restrictive.

Note that this would have been found pretty quickly by our "normal" put/get property. So far state-based testing hasn't done much for us.

Ahh, now we're getting somewhere a more interesting. We've generated a sequence of putting to a key and then getting the same key with a trailing slash we get back an unexpected value. The key-value abstraction has definitely leaked the underlying file implementation!

This now would have required a slightly more sophisticated property testing rather than a simple round-trip like shown above. We didn't even have to think about it, it just comes with modelling each command once.

Also note that it appears to have found the absolute minimum case, where "a" is the key. If you disable shrinking you may get up to 100 steps, where only two of them are relevant to the failure case.

Ok, so this is where things get really interesting. By changing two lines we transform our sequential test in to a parallel one. Without changing any of our testing logic!

What does it find?

This can be slightly harder to read than sequential test output. In parallel tests we start by generating a sequence of actions to be run in a single thread. This is basically to initialise our state/store safely. At this point we then generate two sequences of actions, and execute them on two JVM threads and race them. At this point it's now basically impossible to observe the exact sequence of actions that happened on either thread. Instead what hedgehog does is re-run the model update for each combination of actions, and at least one of the expected results must not be a failure. We must be able to find one (potential) way that we reached the output we observed (ie it must linearize)

From that error it looks like we are somehow getting back an empty result from Get That should be impossible, and yet here we are. If we look at the implementation it should be easy to spot:

There is a very small window where we open the file writer and write before flushing/closing. And yet hedgehog found it! As a better alternative we could write to a temporary file, and then rename once the data has been written, which should be atomic.

Would we have found that edge-case ourselves with any kind of example or property testing? I highly doubt it!

One thing I have left-off is probably the most confusing aspect of the hedgehog implementation of state-based testing (it doesn't exist in ScalaCheck for example). This is that we have to deal with something called Var and Environment. These are visible in the execute, update and ensure functions:

For the tests we just wrote we actually don't need them, but they are useful in more complex testing scenarios. Please see the next tutorial to learn more.

For now just ignore them, you can still get started and write some reasonable properties like we just did.